Well, he has finally arrived! Our bundle o' love came three weeks early, which is right on time considering we will be able to go up to Alaska the same time as Jared.
Here's how the birth went...........

I was sitting on the floor on after midnight on Wednesday June 24th. I had been having Braxton Hicks contractions off and on for about three days. I felt a real contraction happen, and then I felt fluid coming out of me. Jared says the key phrase of my birth should be, "Something is coming out of me!" I thought my water might have broken so we called the midwife. She told me just to try and sleep through the night. So we went to bed, and I had contractions through the night, but I was able to sleep through them. 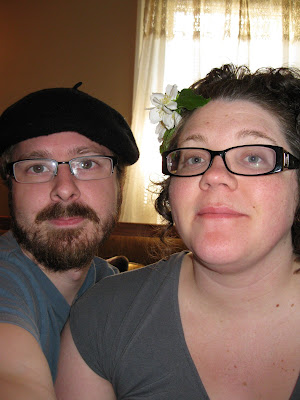 In the morning our Doula Jamie came over. We took a walk and played cards, then took a nap. Jared and Jamie helped me through the contractions, but I felt like they were pretty easy to handle, like period cramps. In the evening we went to the birth center, my contractions weren't speeding up and the midwives wanted to check and see if my water had broken or not. There was no evidence of amniotic fluid, but sometimes people have more then one bag of waters, or the bag can open and reseal. So the midwives sent me home to sleep again.
Thursday night was more difficult, with the contractions stronger and closer together, I was able to sleep but only in 15min increments. By Friday morning around 8:00 my contractions were five minutes apart lasting one minute for one hour, so it was time to go to the birth center. I could have stayed home longer, but after throwing up, I wanted the comforts of the birth center.
When we arrived at the birth center Catrina was the midwife on call, I was three centimeters dilated when I got to the birth center. Catrina immediately sent us out for a walk. We took a long walk, and I had to stop many times to lean on Jared or Jamie during a contraction. 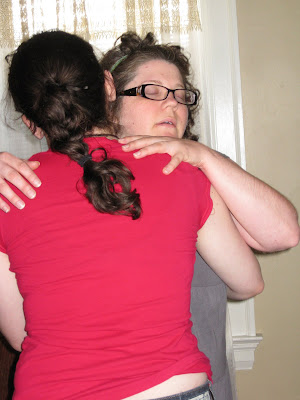 The goal is to get your contractions speeding up until they are right on top of each other and then the baby is ready to be pushed out. Well, my contractions would speed up and then slow down, then speed up. I labored walking, sitting on the birthing ball, and on a birthing stool. 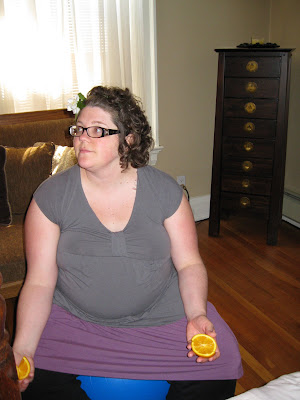 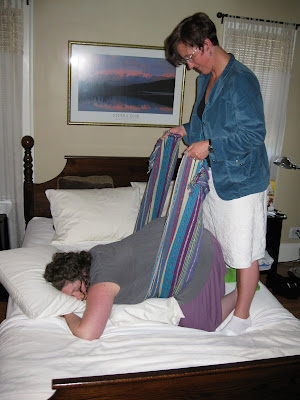 The midwives tried repositioning the baby using a rebozo, and on toward evening they tried cervical massage to try and turn the baby's head. I think the cervical massage was the most painful part of the labor for me. After the cervical massage, and laboring all day, I was only dilated 5 centimeters. Since my labor was not having a normal progression the midwives started talking about transferring me to the hospital. They had to give me some IV antibiotics, but had a hard time since I was dehydrated and ended up sticking me a few times. That was a very low point for me because I had to give up my dream of a natural birth. I was terrified of having to go to the hospital and possibly having a c-section.
The our doula Jamie came with us to the hospital, as well as Catrina.
I thought I would get whisked in to the hospital, but it actually took a long time to get checked in. Around midnight Friday we got in a room they hooked me up to all these machines. I had an IV in my hand, a monitor over my finger, two monitors around my stomach, and a huge blood pressure cuff on my arm. That was not the end of the gear either. The doctor finally came in and she said after reviewing my chart she thought my labor had just failed to progress, and all I needed was some pitocin. She then proceeded to ram her had up inside of me and I almost jumped off the table. Then she told me we had to "work together" apparently that meant me lying still while she rammed her hand in side my tender cervix. Then she asked us if there was anything she should know and I asked for the baby to be placed on my stomach when he was born. She said that is procedure as long as everything is OK. This caused me to break down because I was just overwhelmed at this point. Then Jared tried to explain that I had a lot of fear of the hospital but he didn't really have the best word choice and he said, "This is our worst case scenario." Which really offended the doctor who proceeded to give Jared a lecture about all the things that could go wrong and he should be grateful for being in the hospital. Needless to say our interaction with the doctor did not go well. So they started pitocin in my IV. An hour or so later I was having really strong contractions which I worked through for about two hours. The nurse came in to check me and informed me I was dilated 6 centimeters.
At this point my arms and legs were involuntarily quaking during every contraction. When she told me I was at 6 centimeters I knew there was no way I would be able to make it how ever many more hours it would take to get me to 10 centimeters and still have energy to push the baby out. The midwife had told me previously she thought an epidural would help everything relax so the baby would move down and help me dilate. So I requested and epidural, and promptly threw up. The anesthesiologist was really awesome, he talked to me like a human and walked me through everything he did. Once the medicine kicked in it felt like my lower body had gone to sleep, but I could still move my legs around. I was finally able to relax, even though my arms were still quaking at every contraction. Jared and Jamie were able to get some sleep, and Catrina went home to sleep for a few hours with her little baby. They had to put an internal contraction monitor in me, as well as a catheter, so that added to my many tubes and wires. Because of all the apparatus on me I couldn't sleep, but I was able to rest. At about 5 in the morning the nurse came in to check me and I was fully dilated! I was so happy! She said we would let the pitocin work for another hour and then I could start pushing.
Jamie called Catrina to come back. A little before 6 the nurse told me how she wanted me to breathe, and started coaching me through pushing. It made me so hot, I had to have cold cloths on me at all times, and they would put them in the freezer and switch them out for every contraction. The mean doctor came in with another doctor explaining she was getting off shift and I would have a new doctor. Hurrah! He was much friendlier and kinder. He checked me and then said, "Well, I guess I'll go change clothes." To which Catrina said, "Jamie do you realize that means he thinks you are gonna have this baby? Let's push it out by the time he gets back!"
So I really got into it mentally. At one point I thought I was going to pass out. It was really hard, but Catrina gave me a lot of pointers. But then they told me to reach down and touch my baby. I felt his head and his hair! The doctor came back in the room, and they had to do all this stuff, move the bottom of the bed, set up this table, put on a gown, blah blah blah, it was taking forever and finally I was like, "I WANT TO PUSH THIS BABY OUT!" To which the doctor said, "OK, go ahead." 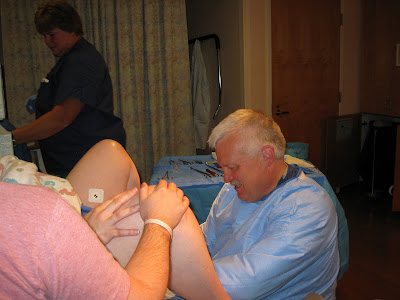 It only took two pushes and they placed him on my stomach. The first thing I said was, "HE"S HERE! HE"S HERE!" The cord was short, so they had to cut it right away, which Jared did. That was the best moment for me, I was ecstatic seeing my baby. I couldn't believe I had done it, there were many points, especially once we went to the hospital that I didn't think I could do it. I was so happy that he was healthy and that I didn't have to have a c-section. 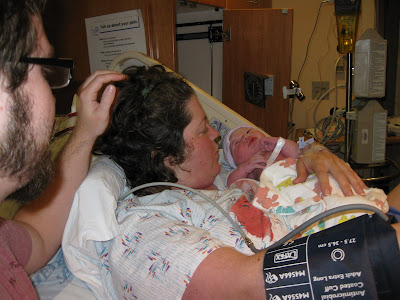 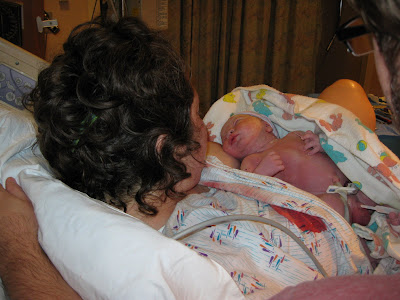 The nine months of discomfort were over and my birth was difficult but memorable. Hopefully next time I won't have to go to the hospital, even though it wasn't as bad as I feared.
So introducing Marlowe James MacKenzie. Born June 27th 2009 at 7:55am, 6 lbs 13oz, 19 in long! 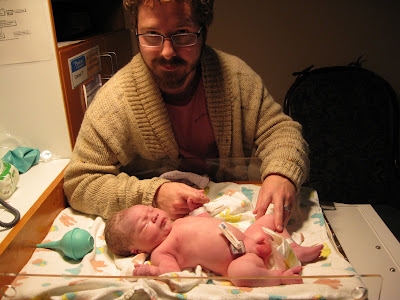 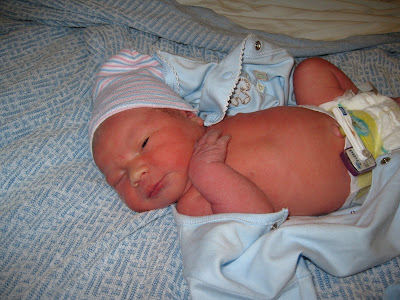 Posted by brownbird at 4:11 PM